Philadelphia Eagles player Fletcher Cox is back on the race scene with an all new Mustang dialed up for the 1/8 mile! Watch as Cox sends this mean machine down the track to a solid 3 second pass! Also, was that Brian Dawkins in the pit? 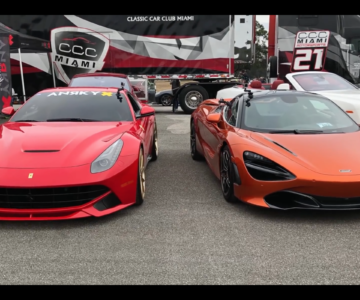 “We head out to the wannaGOFAST 1/2 mile races in Ocala, FL with the ANRKY and Wheels Boutique team and race our McLaren 720S against their 800HP Ferrari F12.” “Tesla P100D Ludicrous Model S at our first cash days style street race where basically you buy into the race and winner takes all. In this case it was a $200 buy-in with basically the only rule being the max slick size is a 28×10.5in tire. That meant there was 14 fast cars that came out to grab $2800 dollars. The only reason the P100D stands a chance is because this was not just a street race, we’re racing backwards at 710 Dragstrip (1/8th mile) and the end of the track is basically worse than any real street that you would race on with it being just tar and gravel. The Tesla struggled to grab traction even with AWD but was up against some easily 5 second cars and trucks. Also Racing a Hellcat a few times for some test passes to see how the car would hook up.”