Lets see what happens when the 405 boys trek over to Dallas for Cash Days on some good ol’ virgin concrete!

“You know it’s going to be a good Cash Days when you’re in Dallas! This round was small-tire cars only, BUT we had big-tire cars like The Crow and Murder Nova show up to give the small-tire game a shot! With nothing but virgin roads, and a heavy police presence – you could say this year was a little frustrating for the racers. It might have taken 2 nights, but we were able to come out with 1 winner, who walked away with $4,000 CASH!” 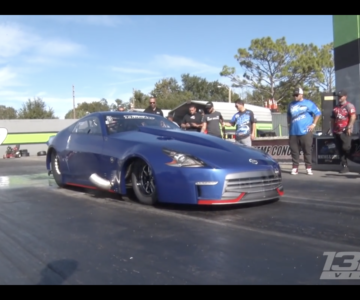 You can put a well built 2JZ setup in pretty much in anything and fly, see here…But this 2JZ swapped 370Z is on another level! Watch as this little beast breaks the 5 second warrior at close to 250mph!

“Jorge Juarbe and his team have built the craziest 370z we’ve ever seen! It may not have much 370z left.. but for the sake of this article – we’re calling it the craziest. It’s no surprise Blue Thunder is seeing 248mph in the 1320, considering the gigantic 106mm Precision Turbo attached to the infamous 2JZ motor thats fitted nicely under the front clip. This car has loads of potential, as it’s only been running less than a year. Jorge and the team are sitting at #8 on the Top 10 Quickest Sport Compacts, and are only a few 10ths of a second away from that #1 spot.”