“Breaking your own record isn’t easy, especially when you hold the fastest 1/2 mile record in the world! Myles and his famous Acura Integra have held the record for fastest 1/2 mile FWD platform for some time, but now that he’s had his sights on 200MPH it’s been on the tip of his tongue! Finally ending up with the right combination of atmosphere and tuning, Myles piloted this little 4 cylinder green machine to 201.07 MPH at Pikes Peak Airstrip Attack! Hosted by Shift Sector, this very popular Half Mile event in Colorado is held annually at the Colorado Springs Airport. This isn’t Myle’s first attempt at achieving this goal, but this was the event to do it at being as how they run you over a shirt showing you’re part of the 200MPH Club!” 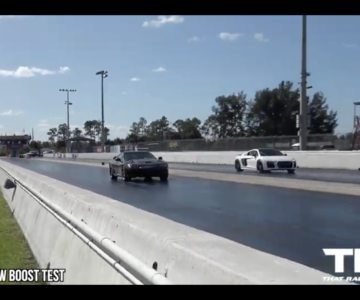 This 1997 Mitsubishi 3000GT VR4 is no play toy! Watch as TRC gets an exclusive interview with the owner as he breaks down this killer build!
“On this episode of the TRC Invitational series we feature Brian’s 1300WHP 1997 Mitsubishi 3000GT VR4. Brian built this car from top to bottom into what is likely the baddest street driven 3000GT VR4 in the world! watch along to learn about his build and watch some really fast cars battle it out. The video also features Paul’s 1000+whp twin turbo stick shift mustang, 1000+HP Turbo Camaro, Audi R8 and more!”