Tiger Woods “DUI” Arrest | Full Dashcam Video – He may not have been drunk but it looks to me that ol Tiger was sure turnt up on something! You be the judge…

Police in Jupiter, Florida, released dashcam video on Wednesday of Tiger Woods prior to the golfer being arrested on a DUI charge early Monday morning.

The video shows that Woods is confused as to his location and very unsteady as an officer puts him through a field sobriety test, confirming details of the police report.

Woods told police he was taking several prescriptions, including two painkillers. Police said Woods was “cooperative as much as possible” and that he agreed to take a breath test and a urine test. He blew a 0.00 in the breath test.

According to a more detailed police report issued Tuesday afternoon, both tires on the driver’s side of Woods’ car were flat at the time of his arrest, and there was damage to the front and rear bumpers.

In a statement released Monday night, Woods had said alcohol was not a factor in his arrest, which he said stemmed from an “unexpected reaction” to prescription medication.

“I understand the severity of what I did, and I take full responsibility for my actions,” Woods said in the statement. “I want the public to know that alcohol was not involved. What happened was an unexpected reaction to prescribed medications. I didn’t realize the mix of medications had affected me so strongly.””

Well we all knew it was coming! Here are the latest and most revealing spy shots yet of the highly anticipated 2018 Toyota Supra!

“When we first saw prototypes for the upcoming Toyota Supra, the cars bore little resemblance to the FT-1 concept of 2014. Now, the camo is coming off and the sports car jointly developed by Toyota and BMW is starting to look more like that radically sculpted show car.

These latest shots reveal a more production-ready front fascia, with intake openings that have a similar shape to those of the FT-1. This car also has an unsightly bump on its nose, which could be hiding the Formula 1-inspired beak of the concept. It’s difficult now to see how that design element would mesh with the rest of the car’s design, but maybe it’ll all come together once the camo comes off.” Read More 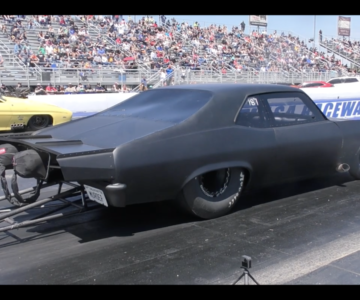 Street Outlaws Murder Nova took to the Midwest Pro-Mod Series to show that the 405 can do it on the track too!

“Murder Nova usually runs in no prep but on this day he entered his car in a promod race at Tulsa Raceway Park. Murder Nova didn’t disappoint with running down the race track with some good runs! The competition was running in the high to mid 3’s and watch the video to see what numbers the murder nova runs. We also threw in extra footage of some unique cars in the video as well. So check out the video and see how well the murder nova did at the midwest promod series.”