“Jeeps have been increasingly more popular lately and by so have been creating some SERIOUS competition! Un-expecting of power levels this high, these platforms have come incredible and terrifying lengths on the drag strip! Screaming down the track of Orlando Speedway in Orlando, Florida during Street Car Takeover, this badass machine was able to display it’s not slouch all while achieving a new Personal Best and possibly a new World Record!” 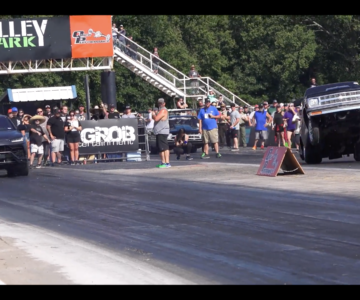 Someone brought their Lamborghini super SUV to Armageddon No Prep event. This rowdy Chevy Blazer tried to eat it alive…literally! 🤣 Skip to the 5:00 mark to get to the race.

“A lamborghini suv in the video will cost you over two hundred thousand dollars while a chevy blazer was less than twenty five new. Yet, both entered the tail gate class where the trucks raced in the armageddon no prep event at noble, oklahoma. Thundervalley raceway hosted the event and this matchup was interested before it happened because the lamborghini was being ran by hpp racing and they know how to modify cars well. In this case the lamborghini was mostly stock with all wheel drive which would have an advantage on a no prep surface. Who will rule supreme between the two? Check the video and see for yourself.”

Take a peek at every crazy ride showcased at this years SEMA show as they get set to hit the road!

“1 hour compilation of all of the crazy vehicles leaving the 2016 SEMA Show. Probably the coolest variety of builds we have ever seen. These cars were headed to the SEMA Ignited after party (Presented by Waylens) to prepare for the cruise. Hope you enjoy! Comment your favorites…”