“Alpha G is hands down one the COOLEST GTRs we have filmed to date. You couldn’t find a flaw on this GTR if you TRIED to. AMS has taken the Nissan R35’s VR38 V6 engine and squeezed nearly 3000 HORSEPOWER out of it! That power combined with a lot of lost weight makes this Nissan Skyline a drag MONSTER. However, putting that power down efficiently is whole different story. AMS is closer than ever to that 6 second pass everyone is chasing! The battle for the drag racing world record in the GTR world is fierce, and Gidi is at the front edge of it! The battle continues as shops fight for the top spot!” 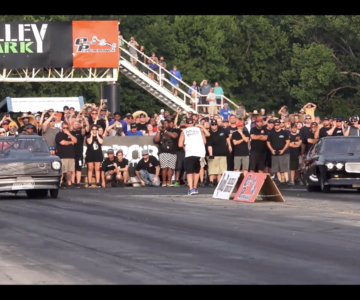 Just a couple 405 boys gettin down at Armageddon 5!

“Big Chief took on Daddy Dave in his twin turbo Nova at Armageddon 5. This was during qualifying 2 where the pair squared off. It was a close race and of coarse entertaining to watch! We threw in their test passes as well the day before they raced each other.”