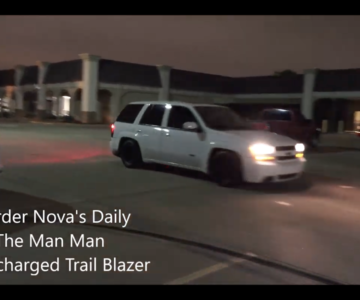 Street Outlaws stars Murder Nova & Death Trap Chuck took to the streets in their quick daily drivers! Murder Nova piloted his Procharged Chevy Trailblazer SS while Chuck ran his Turbo C5 Corvette!
“Now THIS is what we’re talking about! 1500-2000hp big-tire cars, full-sending it for $6500 on the streets of Mexico! Securing a solid spot for racing was harder than we expected – resulting in moving around the city 3 different times, and delaying the racing to the early morning hours. But it was WELL worth it! In this video you’ll see a few familiar faces from TV including racers from Memphis Street Outlaws, Anthony’s Hercules Nova, Mustang Mike, Rankins Relic Conquest, and Derek’s Silver Unit Camaro from the 405 Street Outlaws!” 6 Of The Fastest Supra’s You Will Ever See!

“The Supra is hands down one of the most iconic cars in the world of wheels. This time, we dive into 6 Toyota Supra monsters that are just a touch faster than they were from the factory. If you aren’t careful, these things will peel the skin right off of your face.”