900 naturally aspirated ponies on tap and built in air-jacks…Take my fuggin money! Check out this heavily modified Toyota Tacoma powered by a NASCAR cup series V8 with AutotopiaLA!

“This is by far the most insane car we’ve shot! Brad Deberti partnered up with TRD and built this absolutely bonkers nascar powered v8 Toyota Tacoma with over 900 horsepower naturally aspirated… So sit back and enjoy the ride… ” Inside The New Tesla Semi Truck & Walk Around – Just in case you missed it…this thing can hit 0-60 in 5 seconds!

“I sit inside and take a detailed look inside and outside the all new Tesla Semi Truck at it’s unveiling at the Tesla Design Studio in Hawthorne California.” 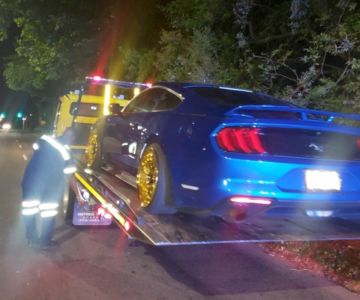 Unless you have been under a rock you’ve probably taken notice to the rising sliding/street racing scene in urban areas. Looks like Atlanta has had enough of the reckless grown-up horseplay! 44 people were arrested and 29 cars taken in probably the biggest street racing bust in the city’s history. Folks better start deleting those IG videos! 🤣

“In a joint effort by multiple law enforcement agencies, 44 people were arrested over the weekend in connection to illegal street racing in Atlanta.

Here are the 44 arrests that were made on Saturday and Sunday, according to the police reports.