Talk about the “Highway To Hell”…X275 racer Brendan Mills literally watched his life pass before his eyes during this crazy engine explosion at Woodstock 2020. Not sure how salvageable the car is but its good to see that he walked away with minimal injury.

“Brendan Mills suffers a horrible fire during Friday qualifying at Woostock. Mills escaped from the inferno unharmed. Race Day Replay brought to you by Edelbrock!” 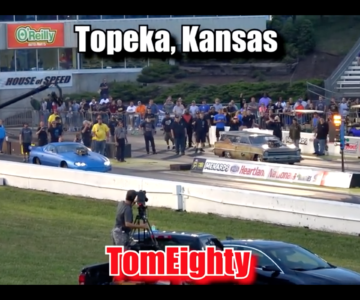 Looks like things got a little muddy for Street Outlaws star Swamp Thing during the filming of No Prep Kings. Thankfully everyone was able to walk away unharmed!

“This is the first filming of the 2nd season of No Prep Kings and it was in Topeka, Kansas at Hearland Motor Sports complex. When Swamp Thing came up to the line the announcer said that the car had a 632 Big Block with nitrous in it, but he later corrected himself and said that the wagon now has a 800 some cubic inch big block in it and they are testing it for the first time.

I did not get to see the damage first hand on the car, the driver Ryan Taggert was fine after this hard hit into the wall but they loaded the car up quick and left. I’m assuming they wanted to get started on fixing what broke on the car so they can make it to the next race.”