This little Fox has a big surprise under the hood!

“This is a sick build all the way around! And Quiet Riot 2.0 is definitely a masterpiece! Car was getting down a few weeks ago! Straight business and it’s a Hemi headed Ford! Coupe Performance built another bad one right here” 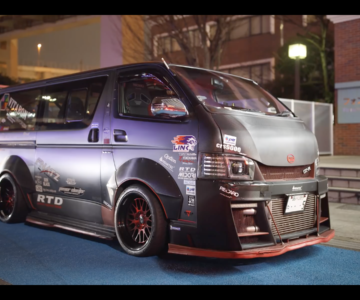 Welp, like the title said…Only in Japan! This sick genius managed to stuff an R35 GTR motor into a Toyota Hiace van mated to a diesel transmission and this baby rips! The place meant of the twin turbo GTR motor alone will make your jaw drop, then you get on to the 5 passenger Recaros and Widebody stance!

“The Toyota Hiace does a great job of hauling people around – no doubts there. But you know what a Hiace is really missing? A twin turbo, fire breathing v6 from a GTR. Said no one ever. But really, we’re ALL about the ridiculousness of this build. A Nissan VR38 (pulled straight from a R35 GTR) isn’t necessary for people hauling at all, but it sure is necessary for our general interests of automotive awesomeness. Through some clever fab work and sheer determination, this just became one of our favorite Toyota Hiace-es ever.”

“First time at the quarter mile with the Tesla Model S P100D and our new lightweight Tsportline TS115 series wheels. Not breaking records this go around but racing in two separate 1/4 mile drag racing classes down Atlanta Dragstrip at the Super Heavy Weight Shootout. Must be domestic and weigh in at least 4,000lbs. Heads up 11.0 Index class and a quarter mile bracket class.”