“The unique builds always intrigue us more than the fast builds! In this case – a REAR MOTOR B18 Honda with RWD! Built from scratch in a home garage, this turbo b18 is making over 500 horsepower at 25psi! We’re sure this won’t be the last time we see this car, hopefully next time will be on the race track! ”

“Found a 1/4 mile money race on the street with a Modified ZL1 Camaro vs the Tesla Model S P100D Ludicrous Plus. It was sort of a $500, from each side, run what you brung deal where the owner didn’t want to discuss all of his mods…nitrous…but there were some problems with it so to be fair he was given the break and he back tire for $200 per side. Along the way racing a Kawasaki ZK14 from a roll and a dig, where he got the break. Also racing a Paxton Blower Coyote Mustang and even a 2016 completely stock Nissan GTR, back before we had Ludicrous “Plus”.” 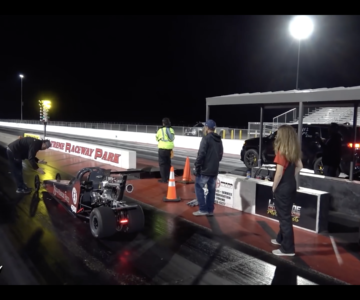 Gotta start them early! Checkout this teenage girl dragging a Jeep Grand Cherokee “SRT” Trackhawk for the cash! Im pretty sure he didn’t see that coming…Way to go kid!
“I was out testing some new tires to try and keep the front tires from coming so high off the ground and saw a Jr. Dragster racing for money against a Jeep Trackhawk…”
PICS: