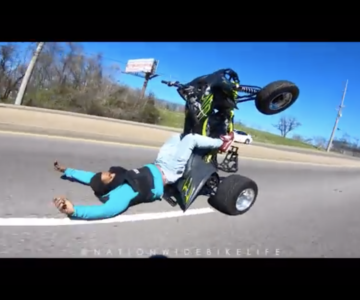 I’ve been working in Nashville for the past couple weeks and actually saw the crew twice on this day. Once they hit the Broadway strip Police attempted to stop them resulting in an officer being dragged into a steel barrier (See video below). Not a good idea to try and tackle a moving Quad huh! Luckily the officer only sustained some bumps and bruises. As seen in the above video the Officer’s walkie-talkie somehow ended up in the hands of the bikers after the incident. After speaking with some local riders who participated I learned that the guy who hit the Officer was apprehended and released on bond. Unfortunately for him he is now back behind bars for unrelated charges.

“Nationwide Bike Life recently made a stop in Nashville Tennessee. The streets were perfect for wheelies and this was one of our favorite cities to ride in. Take a look as the pack rides through the city showing off the latest stunts. What’s your favorite city to ride in? Where should we go next to find the best riders??” “While testing our new DSS driveshaft(installed by Gearhead Fabrications) and K&N filter on the Hellcat we were trolled by this badass chick on a modded Hayabusa!”